As a company built on magic and illusion, Disney parks have many secrets that go into creating the perfect show.  Imagineers toil to discover just the right mixture of dye to color the waters of the jungle cruise.  They use scents everywhere to aid in transporting guests to another place and time.  You may already be aware that Magic Kingdom is actually on the park’s second level.  Utilidors form the first level where cast members collect garbage, make deliveries and take breaks undetected by guests. With that in mind, here are five Magic Kingdom secrets that you probably didn’t know. 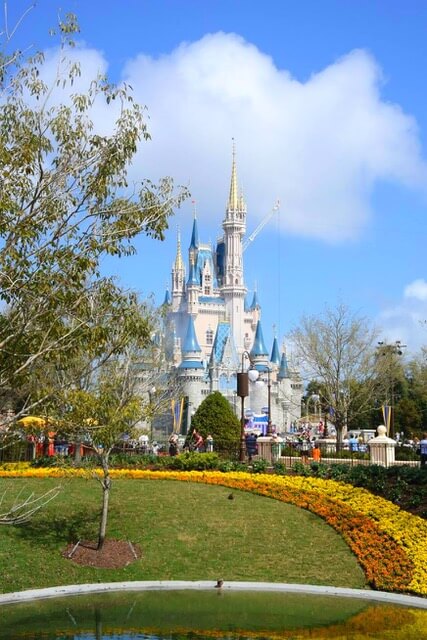 Magic Kingdom has a flag retreat ceremony in Town Square every night that is really neat to be in the area for.  They have a veteran who is a guest in the park do the honors.  However, the rooftops of Main Street also have flags.  Disney doesn’t follow protocol in taking these down nightly.  They are actually lightning rods dressed to support the theme.  The Flags are of the old 48 star variety and therefore do not need to be taken down nightly.  They also point to the era in which Main Street USA is meant to reside.

Liberty Square is full of symbolism from the Liberty Tree which bears 13 lanterns representing the original colonies, to the bridge to Frontierland that marks a subtle transition and represents the crossing of the Mississippi.  The ground in Liberty Square is also symbolic.  There is a ribbon of brown running through the center of the road.  That represents the sewage that would have been streaming through town during that period.

Imagineering carefully crafts the textures and materials of the ground in all areas of the Magic Kingdom to support the immersive effects of each convincing theme.

You may or may not notice a far amount of buildings and objects painted a specific shade of green.  This is the color Disney paints things when they don’t want you to notice as you take in their detailed and elaborately constructed surroundings.  They call the shade “Go Away Green” and it’s very effective.  It’s not invisible, but your mind tends to ignore it as it focuses on other more entertaining features.

Magic Kingdom stands on the second floor, above what Disney refers to as utilidors (utility corridors).  But Cinderella’s Castle goes a step… or floor beyond that.  The castle is much smaller than it appears, yet it is inexplicably visible from across the Seven Seas Lagoon, when no other part of Magic Kingdom (aside from Space Mountain) can be viewed outside the park.

This is because the castle begins a level higher than the majority of the park, which helps contribute to the forced perspective of it’s construction which includes shrinking towers and windows as the structure climbs upward.

Space Mountain has a very prominent presence and can be seen by guests around the Seven Seas Lagoon.  Inside the iconic structure, however is a rollercoaster more closely resembling the Matterhorn Bobsleds at Disneyland.  There is no Matterhorn attraction at Magic Kingdom.  That’s because the bobsled style ride had been redressed for Magic Kingdom as the first ever Space Mountain,  This theme was so popular that versions of it went on to appear in four other parks, including Disneyland.