Tiana, Cinderella, and Rapunzel gather together with their friends to show that dreams really do come true if you dare to dream.

I have been fortunate to have had the opportunity to take my 4 year old daughter to see Disney on Ice last October for Disney’s Rocking Ever After. So I thought that it would be similar and would know what to expect. I decided to take along my daughter and my niece, who are both 4, as well as my mom, mother in law and sister in law… a girl’s night out.  Despite some difficulties getting our will call tickets (they printed the wrong date) we were given some really awesome seats. For anyone who knows the Palace of Auburn Hills you know that it is an extremely large facility and can seat a very large crowd. The tickets we were given were in Section 125 Row A. We were the 2nd tier from the floor. The seats were in an almost perfect viewing position. 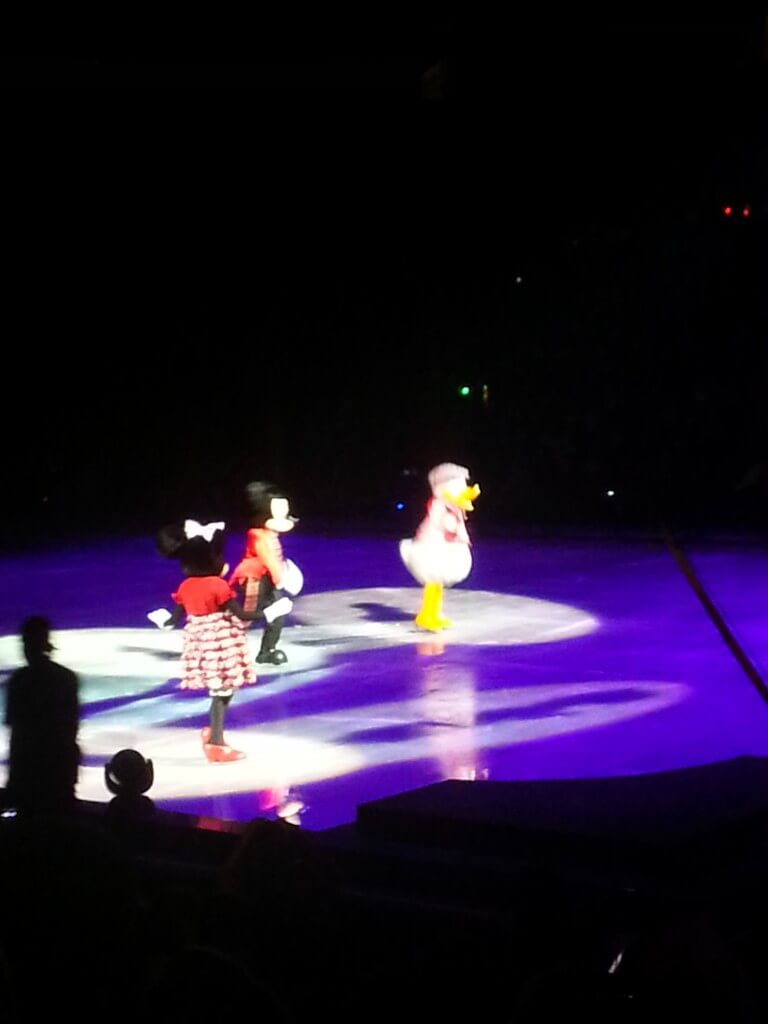 The Disney MC’s Mickey, Minnie, Donald and Goofy brought along an incredible cast of characters to tell the stories of Tiana (The Princess and The Frog), Cinderella (Cinderella), and Rapunzel (Tangled). The show opened with the story of the Princess and the frog in which Princess Tiana and Prince Naveen meet and fall in love despite being cursed into being frogs. The Ice show was full of Magic; Mayhem and Merriment .The stars did an amazing job at showcasing the transformation from human to frog and back again. The Disney crew did an incredible job of making sure you knew it was set in New Orleans. 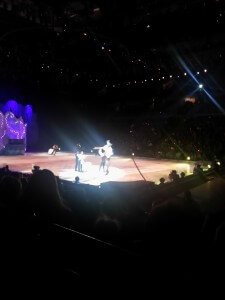 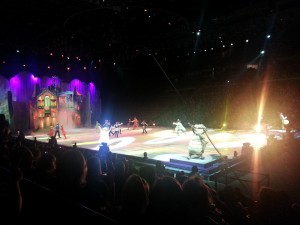 The second act of the show was the beginning of Cinderella in which they showcased The star herself as well as her wicked step mother, stepsisters, her mice friends and of course the Fairy Godmother. My favorite part of this act was the pumpkin becoming a coach and horses. The horses were beautiful and the coach was full sized with Cinderella actually carried across the ice in it. 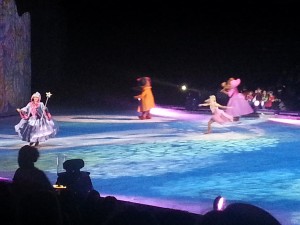 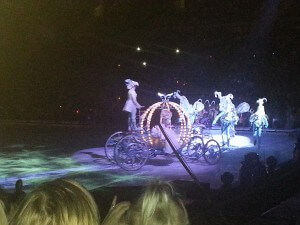 Of course with all of Disney’s Ice shows they gave an intermission for the guests to stand, walk around and of course potty breaks for the munchkins. The timed it to be in the middle of Cinderella’s story, which they resumed and finished after the intermission with the prince searching and finding his princess. 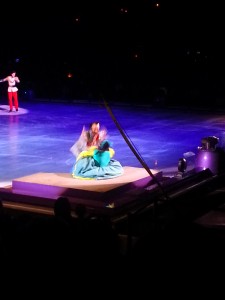 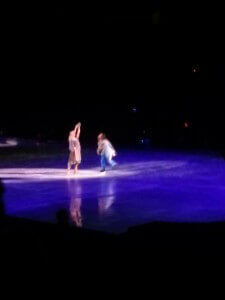 The third act of the show was the story of Rapunzel and Flynn Rider. This was by far my favorite part of the show. They told the story wonderfully and added in aerial elements that were not expected with Flynn and Rapunzel flying and dancing with her “Hair”.

Of course they had Mother Gothel and the crooks. They had the “I have a dream” song and the Bar patrons singing along. The best character costume was Maximus the horse who had a major part in the show too. 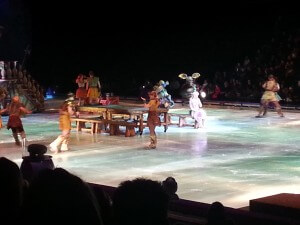 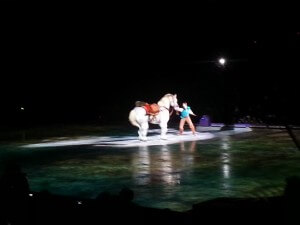 During the lighting of the lanterns for the lost princess, they had pulled a little girl from the floor seats and had her become a part of the show by “lighting” and releasing a lantern which in turn caused the rest of the lanterns to light up and float. 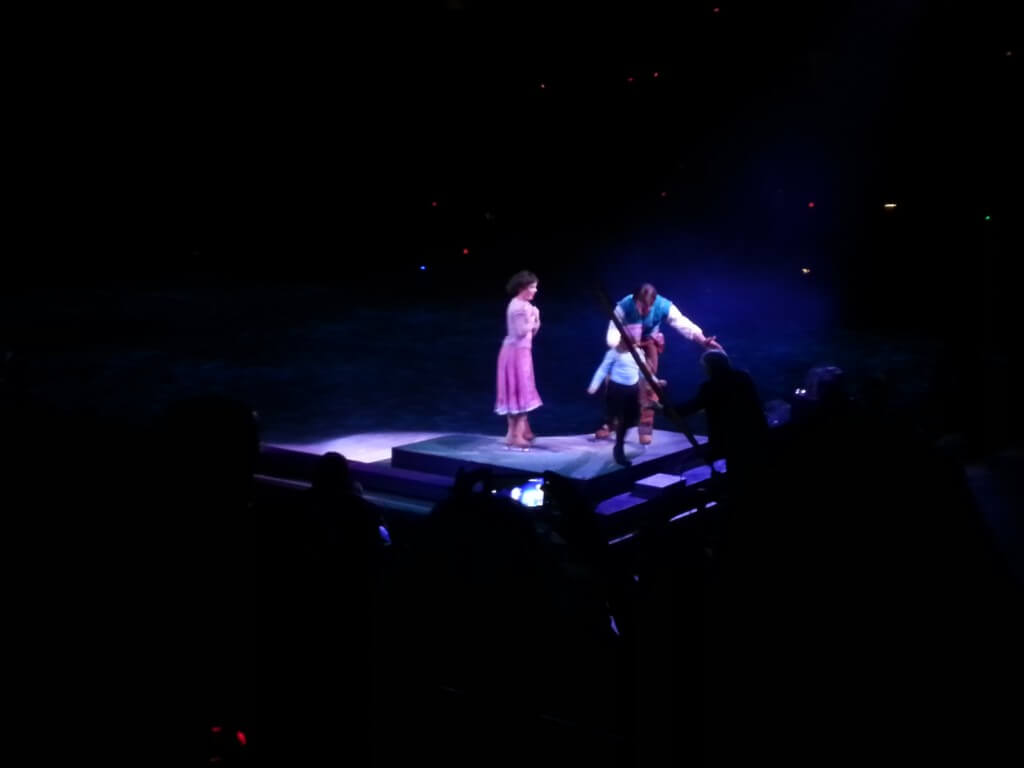 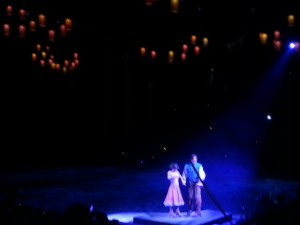 For the fourth and final act, which is the end of Rapunzel’s and Eugene’s (Flynn) story the Disney MC’s came out to welcome the newest Princess into the Disney fold with all of our favorite princes and princesses for the finale. 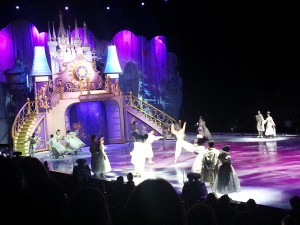 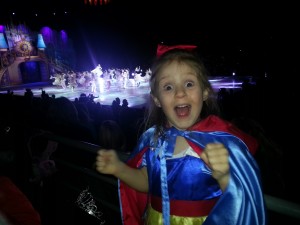 When the Princesses and Princes started coming out, my lovely daughter had a major freak out 🙂 Myself, my sister in law and my munchkin had another amazing time and my niece, mom and mother in law enjoyed their first times. Disney put on another amazing show for its loyal audiences. 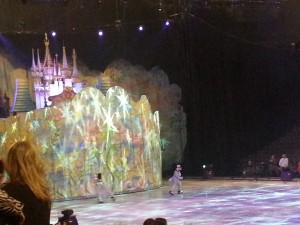 and they lived happily ever after… the end 🙂